Background and Advantages of MBBR process

Judging from years of operation and practice, although the activated sludge method is relatively mature, it also has many shortcomings and deficiencies, such as large aeration tanks, high floor space, high infrastructure costs, etc., and adaptability to changes in water quality and water volume. Low, the operation effect is easily affected by water quality and water volume changes. In view of the above factors, this sewage treatment method was gradually replaced by the later biofilm method. The biofilm method makes up for many shortcomings of the activated sludge method, such as its good stability, strong ability to bear the impact of organic load and hydraulic load, no sludge expansion, no backflow, the high removal rate of organic matter, and the volume of the reactor The advantages of small size and small footprint of the sewage treatment plant. However, the biofilm method also has its own unique defects, such as the easy clogging of the filter material in the biological filter, the need for periodic backwashing, the simultaneous fixing of the filler and the difficulty of replacing the aeration equipment under the filler, the carrier in the biological fluidized bed reactor Particles can only function in a fluidized state, and the process stability is poor... etc. Because of the shortcomings and deficiencies of the above two processes, moving-bed-biofilm-reactor (MBBR) came into being.

The MBBR method was introduced in the late 1980s and was quickly applied in Europe. It has absorbed the advantages of both the traditional activated sludge method and the biological contact oxidation method to become a new and efficient composite process treatment method. The core part is to directly add suspended fillers with a specific gravity close to water into the aeration tank as the active carrier of microorganisms, relying on the aeration in the aeration tank and the lifting effect of the water flow to be in a fluidized state. When the microorganisms are attached to the carrier, The floating carrier moves freely in the reactor with the swirling and overturning effect of the mixed liquid, so as to achieve the purpose of sewage treatment.

The current sewage treatment methods mainly include the activated sludge method and biofilm method: activated sludge method from the United Kingdom in the early 20th century Since its inception, after decades of development and innovation, it has had a variety of operation methods, and at the same time, it has gradually become a more mature process recognized by everyone due to its excellent sewage treatment effect; the biofilm method is to use the organisms attached to the filler to affect the water body A process for purification has also been rapidly developed and improved in recent years.

The fillers are mostly made of polyethylene, polypropylene, and modified materials, polyurethane foam, etc. The specific gravity is close to water, mainly cylindrical and spherical, easy to hang the film, no agglomeration, no clogging, and easy to remove the film.

A good nutrient, anoxic, and the anaerobic environment is formed on the packing, and nitrification and denitrification reactions can occur in one reactor, which has a good effect on the removal of ammonia nitrogen.

(4) Easy to maintain and manage

There is no need to set filler brackets in the aeration tank, which facilitates the maintenance of the filler and the aeration device at the bottom of the tank, while saving investment and floor space. 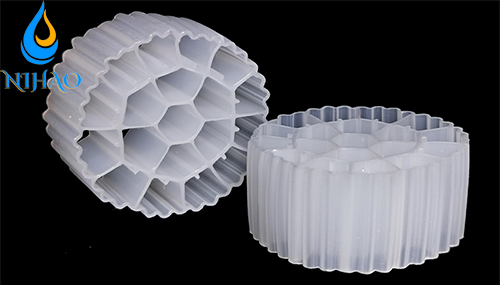